Aerial archaeology was probably born in Syria, about 1925, with the works of a French soldier, Reverend Père Poidebard. This air observer had noticed that, in the desert, at sunset, the long solid drop shadows of negligible reliefs at the surface of ground revealed sometimes geometrical structures! Beginning with this observation, he became the first rational and effective air prospector, since he could thus map all the Roman layout of the files. This precursor was followed in North Africa by Cl. Baradez. In our British neighbors, it is necessary to quote Crawford, Crampton and J-K. Saint-Joseph, with all the power of Department of Survey of Cambridge University... Means to make dreamy French amateurs! In Italy, F. Castagnoli, A. Adamesteanu, General Schmiedt, with Aeronautica militare and Aerofototeca have spectacular results meanwhile that in Germany, an American, Irvin Scollar makes use of all technicals and financials means of the Bonn Landsmuseum. 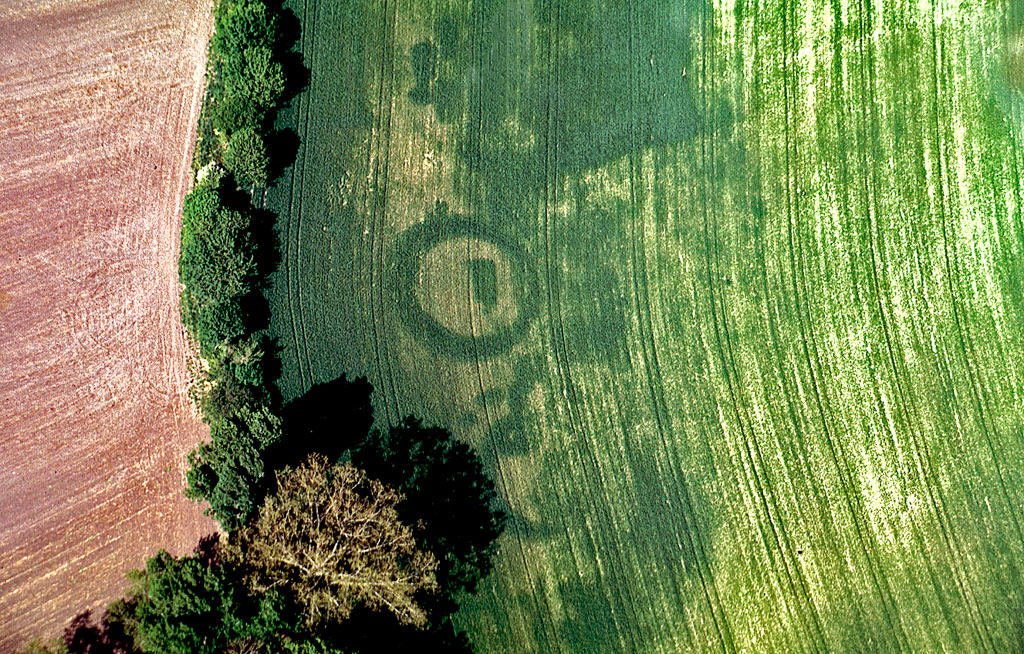 Among the pioneers, let us quote Roger Chevallier, Bernard Edeine, P. Parruzot, Bret etc It is necessary to wait until the Sixties in order that emerges spontaneously from regional prospectors, continuing still currently their work

Exceptional weather conditions in 1976 have caused a multitude of vocations of " air prospectors ". It was so easy that year! The following year, 1977, rather unfavorable, came to moderate much heats, and only continued stubborn people, the courageous ones!

Their list is now long and we will quote only our own area, with :

During a plane walk, it happens sometimes that one distinguishes curious traces in cereals about June: lines, circles or squares, clearer or darker than remainder of cultivations. Maybe is he unaware that he had just discovered archaeological indices! But what is the origin of these traces? As soon as the man dug the ground or brought materials, it destroyed the natural homogeneity which had been gradually constituted during previous millenia. A ditch will have been naturally filled of a filling based on humus however that hidden foundations will give a stonier ground, more calcareous. These sites will have water holding capacities quite different from those of their environnement.

And there resides the secrecy of the origin of these famous traces...

On the old ditch, the plants, cereals, will push better, especially in period of dryness. Greener and more tops, they will yellow more tardily and will be able to pour more easily. Conversely, above hidden foundations, even deeply, the cereals will be finer, lower and will yellow more precociously. In winter, especially after a strong gale draining the grounds, of the water thin cables increase will draw into dark the layout of hidden ditches. Thus sometimes, you will be able to see from the ground confused lines taking shape in the fields, but perception of whole of these anomalies is very difficult. It is there that intervenes the plane: by the distance which it brings, by its facilities of positioning around the site, it makes possible to perceive better the geometrical scheduling of traces observed. Because it is precisely the characteristic form of indices which makes possible to the prospector to recognize the human and probably archaeological origin of these structures which he will photograph. The photographic image will constitute the decisive proof of the existence of a site, and will be joined to the official declaration of the discovery sent to the Regional Service of Archaeology. The principal revealing indices are:

Relations between forms and evaluation of chronological dating

A plane, a pilot, (but is so much better to control oneself...), a camera with a zoom and films: here is the panoply necessary and sufficient to make air archaeology. However another condition exists, but it is not material: it is the passion of search, of untiring search rewarded by the discovery!

Air Archaeology and the Web.

In classification, aerial archaeology is generally placed in the following categories:

It is certain that the term " archaeology " gathers a considerable number of sites and we asked the principal search engines to create the subcategory "Aerial archaeology", equivalent, in another field, with that of "Underwater archaeology ", already existing in Europe. The results of search were examined carefully and only the principal sites treating air archaeological prospections will be reported on "Main links".